The War That Never Was Ravi Rikhye 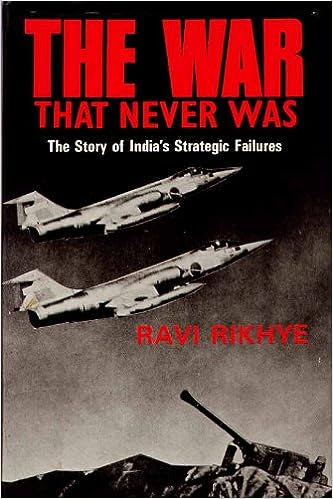 1.         Introduction
2.     About The Author.  The book does not include any information about Ravi Rikhye. However, as known, he is a reputed Indian writer and a journalist. Besides many other known books and columns, he also has a famous book to his credit, “The Fourth Round”. He takes special interest in international affairs, politics and strategy.
3.        Comments on Contents
a.                   General Comments on the Book. Though biased, it is a good        work carried out by the author on the war that never was. The story is about how India, despite its superior strength, lost the 1987 War That Never Was without firing a shot.  It is a comparison of the strength of both sides, so that the reader can make his or her own judgment about the enormity of India’s surrender. It is in the same context that the writer has developed the book.
b.                  Chapter 1- Brass Tacks: Events Leading Upto. The author has explained imperatives of domestic po1icy that led to a situation in which an incident with Pakistan was necessary to divert attention from the growing chaos at home. Though, India prepared to create an incident, when the time came, she let the Pakistan to outmaneuver and backed down. The author also discusses plans for Opera­tion Trident/Brass Tacks in general and analysis it critically.
c.                   Chapter 2- The Pakistan Army.  The author has gone to minute details while tracing out potentials of Pakistan Army. Though, the details given are not 100% correct but include an outline organization of armed forces, deployment, anti-tank missiles, electronic warfare ability, aviation assets, reserves and paramilitary forces.
d.                  Chapter 3- The Indian Army.  The details of Indian Army are covered briefly on the same lines as that of Pakistan Army.
e.                   Chapter 4- How India Lost All Its War.  Analysis of the proposition that war of 1947-48 and 1965 were a favorable stalemate and that of 1971 was an outright victory has been carried out in this chapter. Here the author comments that in all security crises, there have been very serious misperceptions of adversary behavior and that India repeatedly commits same mistake.
f.                   Chapter 5- The Lack Of A Red Team.  The author has remarked that in strategic crises and in war games, the red team plays the opponent and that it is led by weaker personnel which leads to a victory of friendly forces. On the other hand, once put on ground, the government and the army simply failed to comprehend Pakistan’s sound reaction resulting in India’s strategic failure.
g.                  Chapter 6- Sector Balance.  This chapter examines the balance of forces in each sector and analyses the events of the winter of 1986/87. It deals deliberately with Northern Kashmir, Southern Kashmir, Pathankot sector, Sialkot sector, Lahore sector, Multan sector and the Desert sector.
h.                  Chapter 7- The Rival Navies.  It covers the naval assets of the adversaries and relates them with the armed forces of both. After a detailed analysis, the author concludes that both are land powers and that the battle (if any) will be decided by land forces only.
j.          Chapter 8- The Rival Air Forces.  It is an analytical overview of the quantity and quality of both. This chapter also includes allies to both the countries and establishes the time frame in which either of the adversary can get outside support in terms of supply of aircrafts etc.
k.         Chapter 9- The Military Balance in the Event of War.  In a progressive manner, the author has pitched the opposing land forces against each other hypothetically basing on the deployment executed by both sides. He establishes that it was the weak political link, which forced India to back out; otherwise Pakistan could not have achieved absolute victory in any sector to dictate the terms for peace.
l.          Chapter 10- Why Operation Brass Tacks Would Have Failed.  The author dwells upon the problems being faced by the two sides and then discusses all possible dimensions of Brass Tacks. The chapter also touches the peripheral aspects of Pakistan’s strategy against Brass Tacks and too conscious approach of Indian military leadership towards execution of the offensive. The author comments that in order to achieve desired results, General Sunderji has to change the entire psychology of the Indian Army.
m.        Chapter 11- Trident.  Trident was to be an attack by Indian XV Corps on Skardu and then Gilgit with the abject of capturing the Northern Areas of Pakistan. The author analytically discusses the problems linked with this plan and says that the Indian army planners were overcome by their concepts of lightening war, thereby, allowing only two weeks to reach Gilgit via Skardu which was an impossible dream due to incorrect time calculation.
4.        Recommendations. The book covers war as the only instrument to capture Pakistan and talks of reintegration, which in any case is not acceptable to the people of Pakistan. The book is recommended for the students of military history, international affairs and strategic studies.
5.         Conclusion. This book examines Indian ability to achieve an all out victory over Pakistan in the backdrop of Brass Tacks and Trident. It leaves no stone unturned to express Indian hegemonic designs and clarifies that Pakistan Army is a potent and professional force, which has always stood to the cause. The book mainly gives out the weaknesses in Indian military and political system in general and leadership in particular. It is therefore a useful source to know about our enemy and take precautions accordingly.
Posted by Razorclaw at 05:29